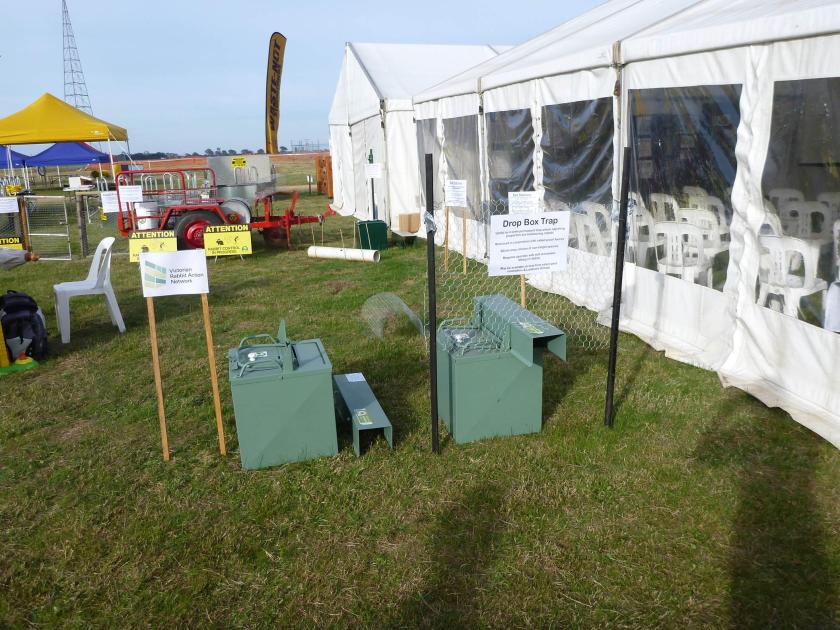 Following on from the large Field Days, four of us tackled the popular Market venues setting up Rabbit Control Information Stands at the Metung Market on two occasions late last year, and the Kings Cove Twilight Market this summer. Once again we provided information show-bags for the public, pictorial displays and a variety of specific information on Rabbit Control methods. We encouraged people to use Rabbit Scan and record their sightings, or download the app. These educational stands proved very popular with many people chatting and asking questions. Some had heard of the forthcoming release of the RHDV K5 release, many were interested in the methods of transmission. Most were local people living in relatively new housing subdivisions. Many advised they had a rabbit problem, but hardly any did anything about the problem themselves, they just let it be!

We found good numbers attended these markets and the public were certainly interested in talking to us. Again they saw no need to get involved; it was someone else’s problem, and they hoped someone would fix.

The Victorian State Government is committed to working in partnership with communities across the state to manage invasive weeds and animals. This commitment recognises the $1 billion plus cost of invasive species in Victoria each year on private land, in addition to their significant socio-ecological impacts.

Agriculture Victoria, in collaboration with community pest management groups for blackberry, gorse, serrated tussock and rabbits, has commissioned a study to gain a thorough understanding of how our social systems work for managing these invasive species. The Systems Mapping Study draws on different types of knowledge from the community and from technical, scientific and policy fields.

Information is being gathered using interviews, and an online survey and storyboard. You can participate by sharing your story here. This information will be presented at a workshop in April 2017 as a series of systems maps, stories and imagery to communicate how blackberry, gorse, serrated tussock and rabbits are managed. Using this information, workshop participants will deliberate on ways to better support community action. The study will also guide future investment in community action on invasive species in Victoria, made possible through the Australian Government Agricultural Competitiveness White Paper.

The study is being undertaken by Lisa Adams & Associates.